Kourtney Kardashian’s days may be numbered on her family’s longtime reality show if her sisters have their way.

On Sunday night’s episode of “Keeping Up With the Kardashians,” Kim (who has clashed with Kourtney all season) and Khloe Kardashian confronted their elder sister for being unwilling to share enough of her personal life.

Their frustration with Kourtney started after she showed up for filming with a hickey on her neck, but refused to share any details. Kourtney later defended staying mum in a confessional.

“My sisters are pretty nosey when it comes to anything in my life and I try to keep certain things private,” she said. “I don’t like to share about, you know, dating.”

Of course, Kourtney’s silence only made her sisters more interested in figuring out who she was dating, despite her insistence she wasn’t seeing anyone.

“Kourtney spends a lot of time off-camera. She won’t talk about her relationship, but you’ll see paparazzi photos of her and her guy that I can’t say his name on the show because Kourtney doesn’t want to,” Kim said.

After catching Kourtney in a lie, Khloe and Kim decided to stalk their sister to see if they could spot the person she’s dating. The plot backfired, and caused a huge fight about privacy and boundaries.

Khloe said it’s the family’s “job” to share every little detail about themselves. Kourtney disagreed, saying that she’ll share anything but her relationships.

“I said I will not share my relationships — that’s it,” Kourtney said. “But I shared my breakdown, crying about having anxiety. I share other things.”

According to audience feedback about the show, viewers don’t feel like Kourtney is sharing enough ― and Khloe and Kim agreed.

“We have a proposal for you: It starts with an F and ends with a D,” Kim said in a clash with Kourtney, fueling speculation that the eldest Kardashian sibling will leave the show.

“I’m down,” Kourtney responded, later saying in a confessional that the thinks it’s “just crazy” that Kim thinks she can fire her from the show. Khloe and Kim then turned their anger on Kris Jenner, who they suggested wasn’t doing enough to ensure the show is “successful” and to get Kourtney to do her job.

“You should talk to Kourtney and say, ‘OK, Kourtney. If you’re not willing to bring anything then you’re done,’” Khloe told Jenner, clearly agitated. 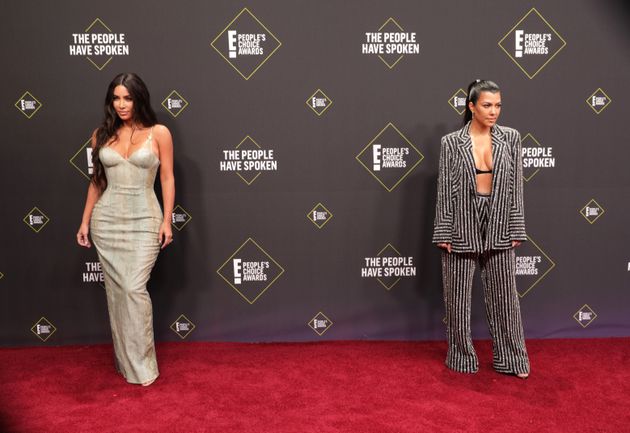 Kim and Kourtney Kardashian posted at the Peoples Choice Awards on Nov. 10.

Kourtney has signaled she’s looking for a way out of the reality show, and said in an interview with “Entertainment Tonight” last month that she’ll be spending less time on-screen.

“I just decided to spend more time as a mom and put more of my energy there,” Kourtney said in the interview, which also included Kim and Khloe. She said the “Keeping Up With the Kardashians” audience can see everything unfold as Season 18 progressed.

“We love Kourtney and we’ll miss Kourtney,” Khloe added in the interview. “But I feel like it’s a revolving door. Kourtney might leave this week, but she’ll be back. They all come back.”

If Jimmy Kimmel ever loses his talk show gig, he might want to think about a career in stoner-detecting. To celebrate the two-year anniversary of legal recreational marijuana use in California, Thursday’s episode of “Jimmy […]

“Crazy Rich Asians” assembled an all-star and all-Asian cast for the groundbreaking romantic comedy, but actor Brenda Song is claiming she wasn’t even given the chance to audition. The 31-year-old star, who rose to fame on […]

Warning! “Last Christmas” spoilers below! Don’t continue unless you’ve seen the movie. The “Last Christmas” trailer gave you its heart, and the very next day, everyone said it gave the movie away. To the untrained […]