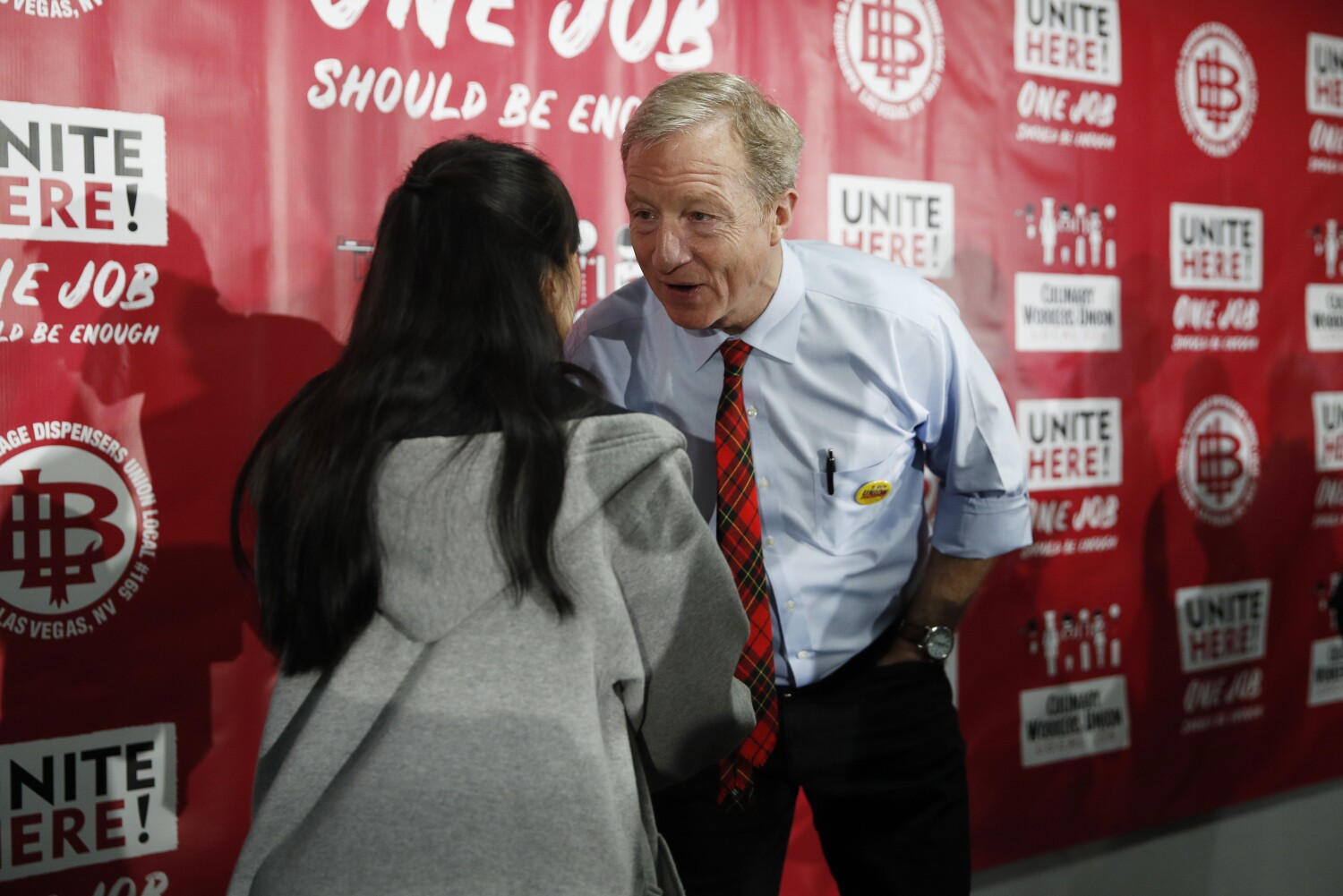 At long last, Nevada’s hour has come, and with it, a new stage of the Democratic presidential campaign.

As the presidential primary swings west of the Rocky Mountains, Democratic presidential hopefuls face a different field of combat in the deserts of Nevada, where a diverse electorate and the lack of an endorsement from the state’s most powerful labor union have shifted the terrain leading up to the Feb. 22 caucuses.

Gone are the ice-crusted sidewalks and the snow-glazed fields of Iowa and New Hampshire, where Democratic candidates trudged for months to court the votes of overwhelmingly white voters.

“Nevada and South Carolina are going to be the first tests of a candidate’s ability to pull together a diverse coalition of Democrats and Americans,” billionaire activist Tom Steyer, who has made more campaign stops in Nevada than any other candidate, said in an interview Wednesday.

The campaigning in Iowa and New Hampshire had forced a strange kind of guesswork upon voters there, who, in their deliberations, often had to look outside their own states’ borders to size up a candidate’s popularity with voters who aren’t white.

That’s not necessary in Nevada, where a candidate needs to appeal to whites, blacks, Latinos, Asian Americans, naturalized citizens and union workers — in short, the constituencies that form the backbone of today’s national Democratic Party.

The campaign of Vermont Sen. Bernie Sanders, fresh off a victory in New Hampshire, feels particularly good about its chances in the new landscape.

“This is the multiracial, multigenerational coalition that will enable us to win in Nevada, South Carolina and to do extremely well on Super Tuesday,” Sanders said in a statement Wednesday.

Yet despite its symbolic significance, Nevada has been unable to escape its also-ran reputation among the first four primary states. The state hasn’t been polled in a month, and many of the top candidates have not visited in weeks; nor have they rushed westward after Tuesday’s contest in New Hampshire, even as their campaigns pour money and reinforcements into Nevada.

Former Vice President Joe Biden, who has collected the lion’s share of top endorsements in Nevada, fled New Hampshire before having to face a humiliating fifth-place finish — and he went to rally with black Democrats in South Carolina. Sanders is making stops in North Carolina, Texas and Colorado first. Sen. Elizabeth Warren of Massachusetts, who hasn’t visited since early December, booked campaign stops in Virginia and South Carolina first.

None of those three plan to appear in person for a Thursday night town hall in Las Vegas hosted by the League of United Latin American Citizens, one of the nation’s most prominent Latino advocacy groups. Sanders is appearing by video.

“I feel that Nevada has been the stepchild to everyone, including the national Democratic Party,” said Ruben Murillo, the recently retired president of the Nevada State Education Assn. who has endorsed Biden. “I feel that our state has been snubbed in a way by some candidates.”

Up-and-comers such as former South Bend, Ind., Mayor Pete Buttigieg and Sen. Amy Klobuchar of Minnesota have enjoyed a bump in attention after their strong finishes in Iowa and New Hampshire, but they have yet to demonstrate backing among voters of color elsewhere. That makes Nevada a major test of their ability to expand their support beyond white voters and maintain their statuses as top contenders.

Both, along with Steyer, are attending Thursday’s night’s LULAC forum. Buttigieg has begun issuing tweets and advertisements in Spanish.

Biden, thought to be a top contender in Nevada, took a blow when the state’s most powerful labor organization, the Culinary Workers Union, announced Thursday that it had declined to endorse any candidate in the race.

Nevada insiders had thought the union would be most likely to back Biden, because of his long-standing relationships with organized labor, his popularity among voters of color and his moderate position on healthcare, which would allow the union to maintain its high-quality private healthcare system, which currently costs its members nearly nothing.

Biden’s poor performances in Iowa and New Hampshire, however, raised questions about whether the union would seek to help resuscitate his campaign without firmer evidence of his viability as a national candidate.

The union’s decision not to back a candidate most benefits Sanders, whose “Medicare for all” plan has been hotly criticized by the union, and whose campaign will now not have to struggle against Culinary’s seasoned canvassers.

Warren is looking for a rebound after disappointing showings in Iowa and New Hampshire.

“Our campaign has been organizing in traditionally red and blue areas of Nevada, South Carolina and states voting in March for months, and in some places nearly a year, and we are confident that we’ll continue to show strength by competing everywhere, not just in pockets that reflect one segment of our party or another,” Warren campaign manager Roger Lau wrote in a memo to supporters Tuesday.

Nevada activists say the uncertainty and the relative lack of investment in Nevada has opened a window for a surprise showing from Steyer, who has flooded mailboxes and airwaves with advertisements.

“Tom Steyer is kind of gaining ground,” said Fernando Romero, president of Hispanics in Politics, a local political group, who thinks Sanders and Biden are the two strongest candidates in the state. “I receive something from him [in the mail] every single day.”

On the morning after the Iowa caucuses, as nearly the entire political world had shifted its attention to New Hampshire, Steyer was sitting on a bench in the Des Moines airport, by himself, waiting for a flight to Las Vegas.

To beat Trump, the Democratic nominee will need to “pull this party [together] across racial lines — black people, Latinos, progressives, moderates,” Steyer said. “That’s going to be very important come the fall.”

Starting in January, a new state law will prohibit millions of California tenants from facing double-digit rent increases and being evicted unless they violate their leases. But it’s not January yet. In the interim, tenants […]

The Supreme Court’s conservative majority on Tuesday shielded a U.S. border agent from being sued for shooting and killing an unarmed teenager standing on the Mexican side of the Rio Grande. Ending a 10-year legal […]

Aiming to speed up the construction of affordable housing and homeless shelters in California, new legislation would make all new low-income housing projects exempt from a key environmental law that has been used to restrict […]