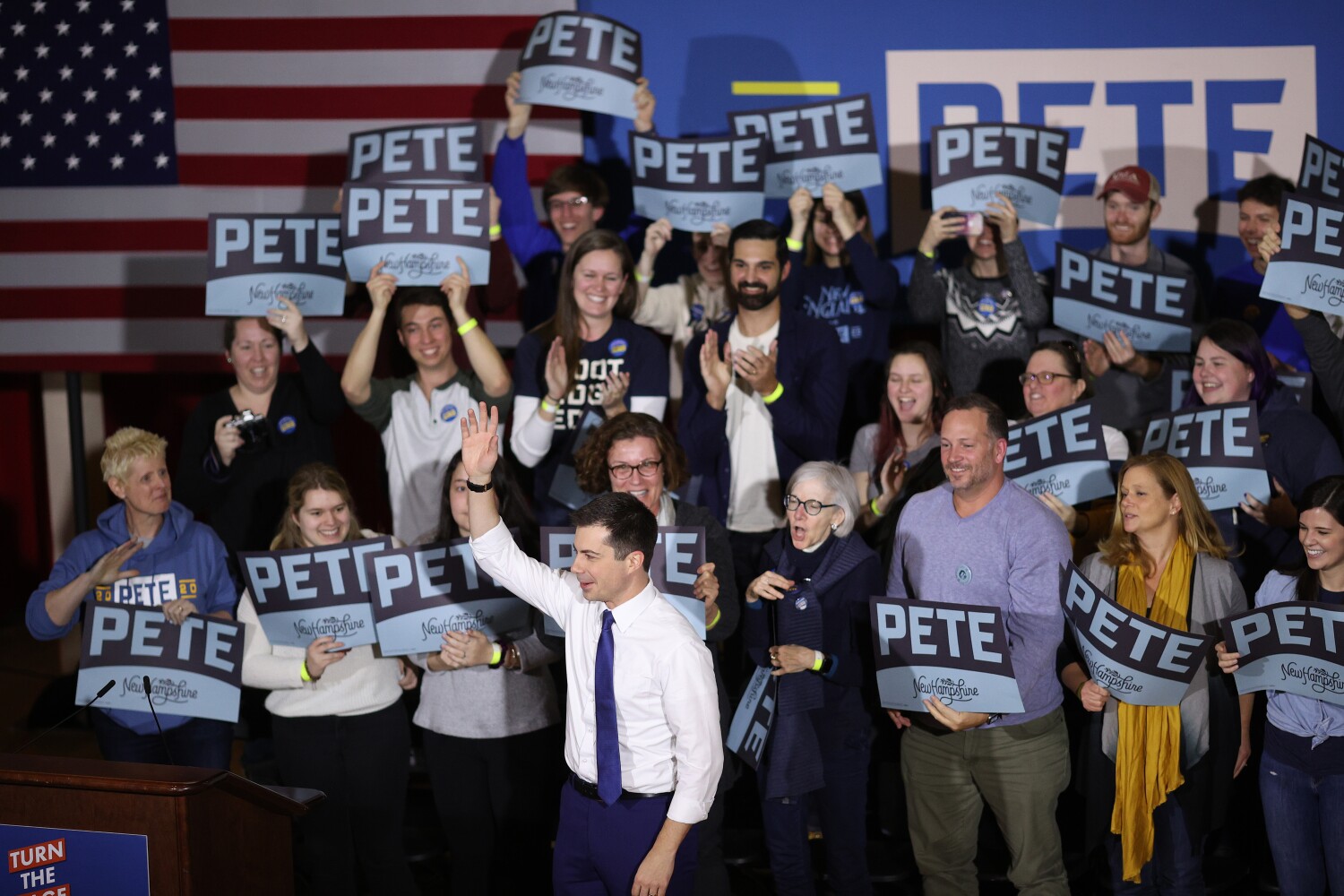 Saying “reports of my death are premature,” former Vice President Joe Biden stepped up his criticism Saturday of Pete Buttigieg, as the Democratic campaign here intensified in advance of Tuesday’s New Hampshire primary.

Biden’s remarks at a news conference here — the first he had held in several weeks — and the release of a new ad poking fun at Buttigieg’s experience as a mayor of South Bend, Ind., came as his campaign struggles to regroup from a fourth-place showing in Monday’s Iowa caucuses and to avoid a similarly dismal result here.

“He’s a good guy. He’s a great mayor,” Biden said during the 20-minute session with reporters at his field office here. “But guess what, he was a mayor.”

He went on to accuse Buttigieg of blaming President Trump’s election on failures of the Obama administration.

“Pete’s been saying for the last two months that all the problems we have today are from the recent past,” Biden said. “I want to get something straight — we did an awful lot of very good things. I don’t know where all this stuff from the recent past is a problem.”

“I’ve kept my mouth shut for a long time. I haven’t responded at all — at all,” he said. But, he said, “when you get attacked, you gotta respond.”

Buttigieg, in his final campaign rally of the day, at a packed elementary school gym in Lebanon, close to the Vermont border, did not bring up Biden by name, but responded to questions about his experience.

“Now, I also hear some folks saying, ‘What business does the mayor of South Bend, Ind., have running for president? You don’t have a big office in Washington, D.C. You haven’t had decades of experience in the establishment. You come from a community in the industrial Midwest that isn’t even one America’s biggest cities.’ To which I say, that is very much the point,” he said, to prolonged cheers.

“There are so many communities — rural areas, small towns, industrial cities and even pockets of our biggest cities — who have felt completely left behind by the ways of Washington,” he continued, “and who are tired of being reduced to a punchline by Washington politicians.”

During Friday night’s debate, Biden all but conceded defeat here, with a blunt exercise in expectation-lowering, predicting he would “take a hit” as he had in Iowa.

Nonetheless, Biden’s major public event of the day drew a crowd of a few hundred — a large share of whom appeared to be out-of-state visitors. In comparison, Buttigieg and Sen. Bernie Sanders each drew enthusiastic audiences near 1,000 as they sprinted hectically across the state.

Sen. Amy Klobuchar of Minnesota spoke to a crowd at Dartmouth College, where campaign officials said she had raised more than $2 million in the day since the debate, her best fundraising total to date, reflecting what supporters saw as a strong debate showing.

And Sen. Elizabeth Warren of Massachusetts urged her supporters to persist despite a disappointing result in Iowa and polls showing her outpaced by Sanders here among the party’s progressive voters.

Multiple polls show an alignment in New Hampshire similar to the apparent results of the Iowa caucuses: Sanders with a narrow lead, Buttigieg gaining and roughly tied with Sanders in some surveys, Warren and Biden close together but trailing the leaders, and Klobuchar gaining ground but still behind.

The state’s voters, however, have long been known for making up their minds at the last minute and for sudden changes of heart. A poll earlier this week by Monmouth University found that only 49% of voters were firmly set in their choice.

Larry Phillips, 73, a retired psychologist from Keene, near the Vermont border, who showed up for Buttigieg’s appearance there, captured some of that uncertainty.

Phillips called himself a “soft supporter” of the young candidate, saying Buttigieg’s appearances on cable TV had impressed him.

“He didn’t sound like a politician who has their thoughts all ready to just spew forth for every question,” Phillips said. “He seemed to be thoughtful and not robotic as a politician.”

But Phillips said he still has reservations, particularly about Buttigieg’s halting efforts to answer questions about racial inequity in his hometown during the debate on Friday night.

“I don’t think he handled that well,” Phillips said.

Like many Democrats, Phillips said his foremost concern was finding a candidate who has the charisma to beat Trump, which he said few of the Democrats have demonstrated.

Sanders does have some of that personality sizzle, Phillips said, but he worried the appeal is limited.

“You either like Bernie or you don’t,” he said.

Diane Tiernan, 63, of Watertown, Mass., who came north to volunteer for Warren on Saturday, fits into that latter category.

On the other hand, she said, if Sanders becomes the nominee against Trump, “I’m voting for Bernie. That isn’t even a question. But let me tell you something: You talk about people going in the voting booth and holding their nose? I will.”

At Warren’s rally in Manchester, the senator summoned memories of a signal career moment to rally supporters.

It was just about three years ago, she reminded them, that she waged an unsuccessful filibuster to block Trump’s pick for attorney general, Jeff Sessions.

After her failed effort, Senate Majority Leader Mitch McConnell noted with asperity that, despite being warned that she was breaking the rules, “nevertheless, she persisted” — a condemnation that has become an unofficial slogan for Warren, embroidered on throw pillows, emblazoned on T-shirts and tattooed on bodies. The words drew a roar from the crowd of roughly 700 when she repeated them.

In her brief remarks, Warren made no mention of her Democratic rivals. The other candidates were less reticent, with Buttigieg on the receiving end of many of the darts.

At an event in Dover, in eastern New Hampshire, one of six he held across the state, Sanders lit into Buttigieg for the support he has received from extremely wealthy donors.

“Billionaires by the dozens are contributing to Pete Buttigieg’s campaign. I like him. He is a smart guy,” Sanders said. “But if you are serious about political change in America, that change is not going to be coming from someone who is getting a lot of money from CEOs of the pharmaceutical industry.”

The Vermont senator also reflected on the role New Hampshire played in helping his movement take hold in 2016, showing that his ideas could connect with voters nationwide.

“The reason we are here today has a lot to do with what New Hampshire did four years ago,” he said.

At the time, “nobody was talking about making public colleges and universities tuition-free.” “Medicare for all” was talked about as a pipe dream, he said.

“What we did four years ago here in New Hampshire is we brought forth ideas that made sense to people, and the people of New Hampshire said, ‘These are not radical, extreme ideas.’

“What New Hampshire showed is our ideas are the ideas the working families, the middle class of this country, believe in.”

Biden, who had disappeared from the trail on Thursday and Friday until the debate, brought the more aggressive tone that he showed on the stage to both his news conference and an earlier get-out-the-vote rally in Manchester at which he linked his political challenge in New Hampshire to the multiple tragedies in his life — the death of his first wife and his daughter in a car accident in 1972 and the more recent death of his son Beau.

“Like so much else in my personal and political life, I know nothing comes easy,” he said. After all the loss he has experienced, he said, “I’ll be damned if I’m going to stand by and lose my country, too.”

Buttigieg began his day at a forum on the courts and reproductive freedom sponsored by groups that support abortion rights.A standing-room-only crowd that filled a community college gymnasium to hear a parade of presidential candidates greeted him warmly.

He called for a “judicial branch that is above politics” but showed his own appetite for partisan warfare, vowing to abolish the filibuster to work around Senate Republicans.

“If we can’t change Congress, we’re screwed,” he said, holding up McConnell’s skillful obstruction of President Obama’s initiatives as a rallying cry.

Buttigieg also touted his abortion-rights bona fides, saying that even in cases of late-term abortion, he would want a woman’s choice to be paramount.

“That decision will not be made any better — medically or morally — because it is being dictated by some government official,” he said.

Later, at his event at Keene State College, Michael J. Fox, the actor, introduced Buttigieg, citing his calm. Fox praised all the Democratic candidates but said that in Friday night’s debate “a lot of them were yelling at me.”

“Pete isn’t screaming. He was talking to me,” Fox said.

Buttigieg asked the audience of nearly 1,000 to visualize a day when Trump was no longer in office.

“I don’t even think that’s a partisan statement anymore,” he said.

Inside the Bellagio resort, more than 100 casino workers wearing soft-soled shoes and uniforms of muted greens and reds walked down the cream-colored Italianate hallways on their lunch breaks as suddenly powerful citizens, not just […]

Three U.S. senators briefly freed from President Trump’s impeachment trial dashed across snow-covered Iowa in one of their last bursts of campaigning before the contest that kicks off what remains a wide-open race for the […]

The history of modern presidential politics in California is a woeful tale of unrequited electoral love. Home to more Americans than any other state, California has seen its elected officials try six times to move […]