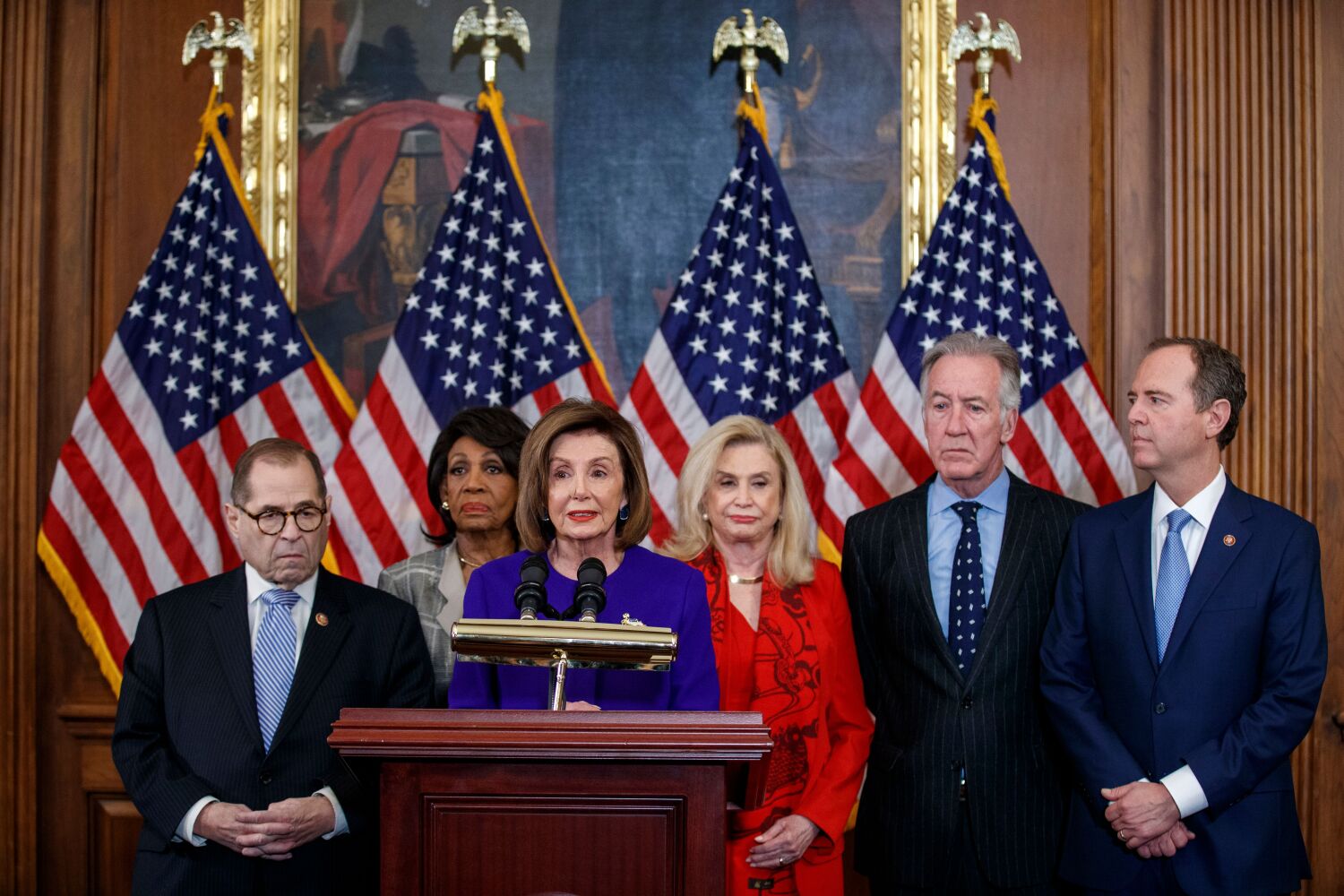 With a vote on President Trump’s impeachment expected in the House next week, Democrats are jockeying to win one of the limited number of coveted spots presenting the case during the Senate trial —a group that is likely to include several California lawmakers.

The House members will essentially act as prosecutors, high-profile positions that can elevate lawmakers’ careers. But Republicans have already harshly criticized several leading contenders from California, including Rep. Adam B. Schiff (D-Burbank), for their handling of the inquiry so far, as well as what they see as the state’s outsized role in the process.

These House “managers,” as they’re called, will be selected by House Speaker Nancy Pelosi (D-San Francisco), who will also decide how many to appoint.

Pelosi is expected to put an emphasis on diversity in geography, gender and background with a focus on members with legal experience, and those who are well versed with the details of the case, according to lawmakers who are close to her. Pelosi’s spokesperson refused to weigh in on the factors she will consider.

The Senate is likely to hold an impeachment trial in January, but is not expected to convict the president, given the chamber’s Republican majority. But the strength of the case that these managers make could influence whether Democrats are able to pick up any Republican votes, which would allow them to claim bipartisan support for the conviction and removal of Trump.

The trial offers an enviable, if risky, platform for the Democratic managers. Under current rules, senators for the most part must remain quiet during the trial. Only prosecutors, the president’s lawyers and Chief Justice John G. Roberts Jr. can speak.

Inside the Capitol, politicking for the posts is already underway.

“There is no shortage of interest in serving as a manager, gauging from the number of people approaching me and I’m sure the speaker,” Schiff, the House Intelligence Committee chairman, said in an interview. “A good team of managers would include a good cross section of representation, include [members who are] deeply familiar with the facts and have the legal and presentation skills necessary. Those would all be valuable qualities.”

Schiff, a former prosecutor, is a front-runner for one of the jobs, given his high marks among Democrats for his handling of the case in collecting depositions and holding public hearings. He also led the managers in the 2010 impeachment trial of a federal judge. And, as a historical footnote, he replaced in Congress one of the managers of the Clinton impeachment, Rep. James Rogan.

However, a few Democrats have privately raised skepticism about whether Schiff is the best person for the job, citing the way Republicans and Trump have often put him in the spotlight, shifting focus away from Trump’s actions and toward how Schiff and his committee handled the investigation.

Schiff demurred on whether he wants the job, saying that it would be up to the speaker.

Other California lawmakers widely expected to be considered for a spot on the management team are Rep. Zoe Lofgren (D-San Jose), who was on the management team of the 2010 judicial impeachment, has been a congressional staffer or lawmaker for two previous presidential impeachment efforts and is widely respected for an even keel; and Rep. Eric Swalwell (D-Dublin), who is a former prosecutor and a member of both the Judiciary and Intelligence committees.

Pelosi has typically awarded fellow Californians with leadership opportunities, such as high-profile assignments or seats on coveted trips overseas. But in this case, a strong California connection could be a deterrent. Republicans have already chided Democrats for the strong coastal presence of the lawmakers who announced the impeachment articles on Tuesday during a press conference. Three members were from New York, one from Massachusetts and three from California — Pelosi, Schiff and Rep. Maxine Waters (D-Los Angeles). Republicans hung a poster of the group in the Judiciary hearing this week, calling them the “coastal impeachment squad.”

Several Democrats are also warning Pelosi not to choose an all-white panel of managers.

“My hope is that we won’t see what we saw with the experts who testified,” said Rep. Al Green (D-Texas), citing a recent Judiciary Committee hearing of constitutional experts, all of whom were white. “I thought that was an insult to the many people of color in this country because the subliminal message that may have been received by many not only in this country but around the world may very well have been that there are no persons of color with expertise in this area of law.”

A key consideration is likely to be the number of managers. There were 13 Republican managers for Clinton’s Senate trial — a figure some found unwieldy at the time.

Judiciary Committee Chairman Jerrold Nadler (D-N.Y.) is also considered a front-runner, given his role leading the committee that drafted impeachment articles. In the two presidential impeachment trials that have gone to the Senate, manager roles traditionally went to members of that panel.

Other Democrats expected to be in the mix are Reps. Hakeem Jeffries of New York; Val Demings of Florida, a former law enforcement officer; Jamie Raskin of Maryland; Terri A. Sewell of Alabama; David Cicilline of Rhode Island; Sheila Jackson Lee of Texas and Joe Neguse of Colorado.

“I don’t want to get ahead of today’s hearing, a possible vote on the floor,” Swalwell said.

It’s expected that most lawmakers would jump at the opportunity.

“Well, of course, but I’m not lobbying. I haven’t spoken to anybody about it,” said Rep. Pramila Jayapal (D-Wash.), another Judiciary member. “I would love to do it if I was asked.”

President Trump’s reelection campaign has banned Bloomberg News from covering its rallies and other public events, citing what it calls a biased coverage policy by the media company of one of his Democratic rivals. The […]

The Rev. Gabriel Salguero paced the stage, his voice booming into a microphone as 3,000 faces tipped toward him. He spoke in Spanish of how Latinos came to the U.S. to escape political corruption. His […]

What do California voters think of Michael Bloomberg?

We’re back to 18. Eighteen Democrats seeking the party’s presidential nomination, trying to get some, any, voter attention before the caucuses and primaries begin. The latest late entry to etch his name on the roster […]