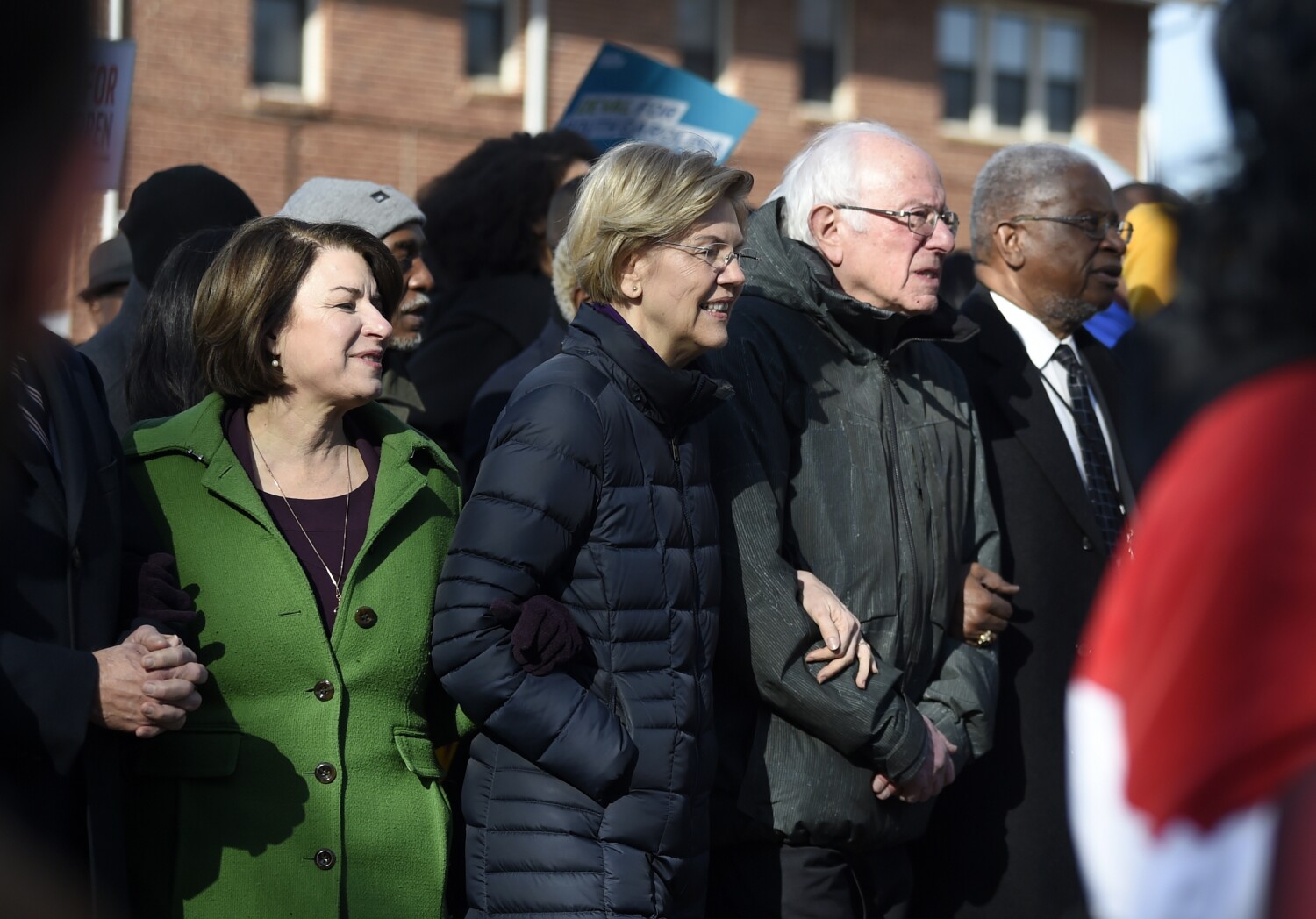 What’s one thing Bernie Sanders, Pete Buttigieg and Amy Klobuchar all have in common, other than the fact they each had a good showing in Tuesday’s New Hampshire primary?

They all come from mostly white states and have little history of electoral success with black voters. They now have only a few weeks to try to change that.

With the continued decline of Joe Biden’s candidacy, which endured a miserably bad night in New Hampshire, African Americans, a crucial Democratic constituency, may now be up for grabs to an extent that has not been true in a Democratic primary in many years.

As a result, black voters could be positioned to decide who becomes the next Democratic nominee. But unless Biden can pull off a huge reversal of his current fate, they may well be choosing among candidates whom many in the African American community have doubted.

“None of them have a long, deep history of support and work with the African American community,” said Cornell Belcher, a Democratic pollster who worked with President Obama’s campaign and is now a consultant to the campaign of former New York mayor Michael R. Bloomberg.

“If Biden does collapse, it will be a free-for-all for the support of the minority vote — which I think is a good thing for minorities to have a big field competing for their vote.”

Polls have shown that at least so far, black voters have preferred Biden over other 2020 presidential candidates by a wide margin, which he hopes will keep his campaign on track with a big win in South Carolina’s Feb. 29 primary, where some 60% of the primary electorate is black.

That’s why Biden traveled to South Carolina to kick off his campaign there Tuesday night rather than hang around New Hampshire for the disappointing results.

Speaking to supporters in Columbia, S.C., Biden minimized the significance of the results in Iowa and New Hampshire, saying it was more important to hear from more diverse states like Nevada and South Carolina.

“We just heard from the first two of 50 states,” Biden said. “Not all the nation, not half the nation. Not a quarter of the nation, not 10%. Two. Where I come from, that’s the opening bell, not the closing bell.”

“Up till now, we haven’t heard from the most committed constituents in the Democratic Party, the African American community or the fastest growing segment of society, the Latino community.”

Biden enjoys a reservoir of good will among black voters largely because of his eight years as President Obama’s vice president, but that support may prove to be more wide than deep.

Perhaps even more than other Democrats, black voters are intensely focused on finding a candidate who can defeat President Trump. In the wake of Biden’s weak showing, there are already signs that his support among blacks is eroding — and that the two billionaire candidates are gaining at his expense.

A new Quinnipiac University national poll released Monday showed Biden’s share of the black vote had dropped to 27%, from 51% in December.

Bloomberg came in second place, nipping at Biden’s heels with 22%. In South Carolina, Bay Area billionaire Tom Steyer is courting black voters and has jumped into second place in many polls.

In South Carolina, Steyer has hired black staff, talked of the urgency of reparations for descendants of enslaved people, and won the endorsement of Johnnie Cordero, the head of the Democratic Black Caucus of South Carolina.

Bloomberg ran an ad during the Super Bowl that touted his gun control record and featured a black mother grieving the death of her son by gunshots.

The irony of the 2020 cycle is that Biden’s hold on African American voters made it difficult for the two black candidates in the race to succeed. And now that Biden might be losing his grip, both black candidates — Sens. Cory Booker of New Jersey and Kamala Harris of California — have dropped out of the race.
In October, when the weakness of Biden’s campaign had begun to worry some Democrats, Booker said in a speech at the National Press Club that if the party was looking for an alternative to Biden, they should be sure it would be someone who could attract black voters.

“In a party and a country that is only becoming more diverse, the ability to build multiracial, multiethnic coalitions is not a nice-to-have — it’s a job requirement,” Booker said.

Biden highlighted the political importance of the black electorate in Friday’s debate in New Hampshire. “No one has ever won the nomination without being able to get overwhelming support from the African American community,” he said. “And so far, no one’s been doing that but me.”

Sanders’ unsuccessful 2016 campaign was criticized for drawing little minority support. In the South Carolina Democratic primary against Hillary Clinton, he won just 14% of black voters, according to exit polls.

This time around, he has worked to improve his outreach among Latinos and blacks in 2020 — especially among younger voters. But still, he drew just 19% of blacks in the Quinnipiac poll.

Buttigieg, the former mayor of South Bend, Ind., and Klobuchar, the senior senator from Minnesota, have each done significantly worse in polls of black voters.

Buttigieg has come under heavy criticism for his handling of race relations in South Bend. Controversy has dogged him over the 2012 firing of the city’s black police chief and a fatal shooting of a black man by a white police officer.

He seemed uncharacteristically tense when questioned at Friday’s New Hampshire debate about racial discrepancies in South Bend arrests for marijuana possession. He has offered a broad plan to address systemic racism, but the outreach has yet to bear fruit.

Klobuchar’s record as a tough-on-crime prosecutor — the job she held before being elected to the Senate in 2006 — is just now beginning to come under scrutiny.

A recent Associated Press investigation suggested that a black teenager her office put in jail for life might have been innocent. And during an interview Tuesday on “The View,” Klobuchar was challenged for prosecuting no killings by police officers during her eight years as a county attorney.

Bloomberg also has many points of vulnerability with black voters, especially relating to his advocacy of aggressive “stop and frisk” policing practices while he was mayor. Hoping to put that issue behind him, he has apologized — something he did again Tuesday after an audio clip surfaced of him in 2015 defending stop and frisk in blunt terms.

“I have apologized for taking too long to understand the impact of stop and frisk on black and Latino communities,” he said on Twitter. “I inherited stop and frisk. In an effort to stop gun violence, it was overused. I cut it back by 95%. I should have cut it back sooner.”

That may not be enough to put the issue to bed.

“There has to be more than apology,” Bakari Sellers, a South Carolina Democrat who backed Harris’ presidential campaign, said on Twitter. “Must be atonement as well.”

But if African American voters face an array of candidates who were not their first choices, Bloomberg may benefit from their practical bent toward finding a candidate they believe will be able to beat Trump, said Andra Gillespie, an Emory University political scientist.

“That would be a knock against Buttigieg or Sanders — whether they could go the distance against Donald Trump,” Gillespie said. “Bloomberg might be able to offset the other issues about how he ran the city of New York by saying, ‘I’m the electable one.’”

Inside the Bellagio resort, more than 100 casino workers wearing soft-soled shoes and uniforms of muted greens and reds walked down the cream-colored Italianate hallways on their lunch breaks as suddenly powerful citizens, not just […]

A tax hike is inevitable to address homelessness in California

OK, I’m waiting to hear about the tax increase that will be needed to pay for Gov. Gavin Newsom’s ambitious plan to solve homelessness. A tax hike is inevitable, but the T-word was conspicuously missing […]

Will John Bolton fill in the gaps on Ukraine as an impeachment witness?

Former national security advisor John Bolton appears to be dangling the possibility of testifying late in the impeachment process about President Trump’s actions regarding Ukraine, potentially providing an account that could fill in crucial gaps […]