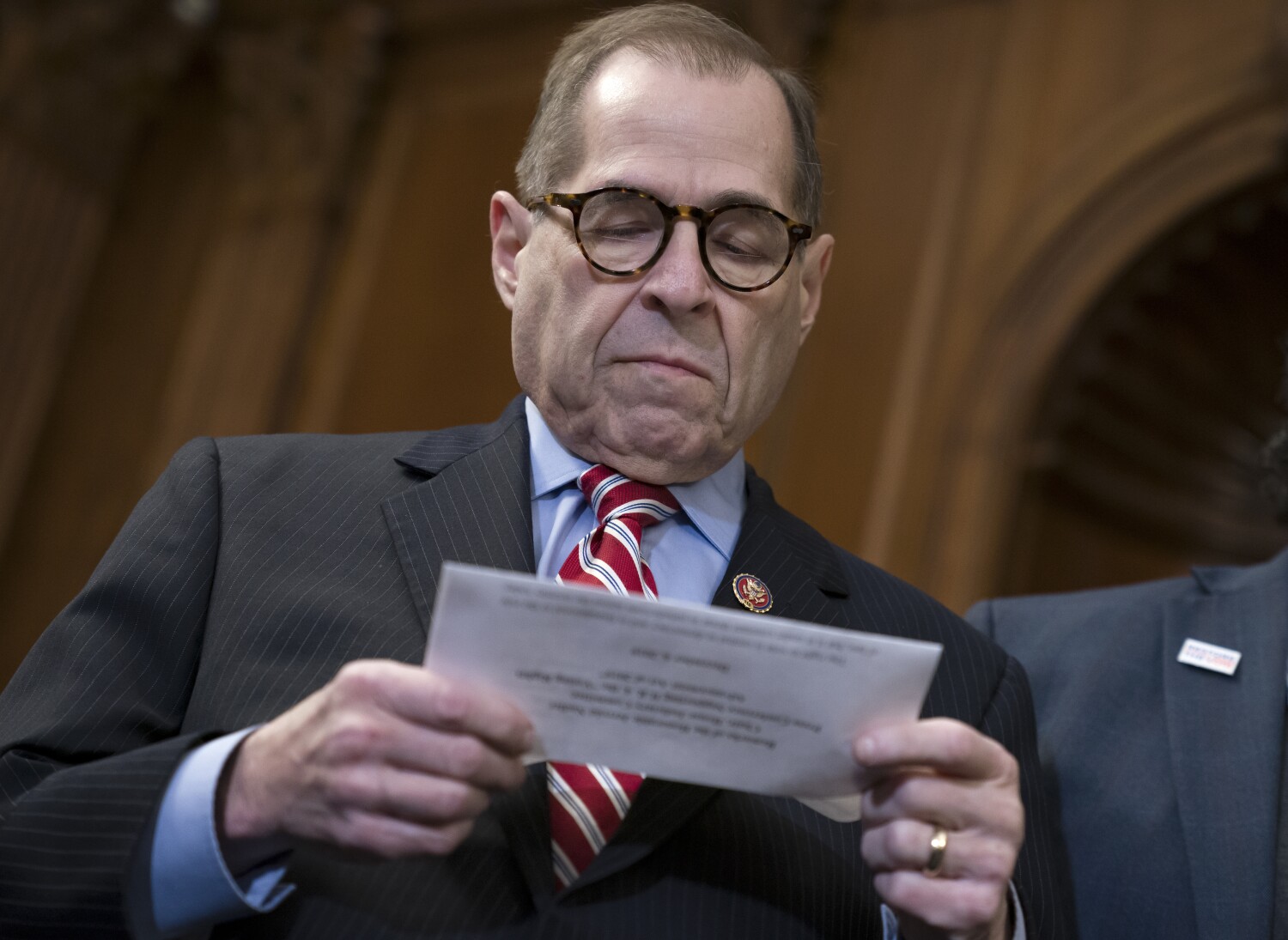 House Democrats plan to announce their impeachment articles against President Trump on Tuesday morning after a final, raucous House Judiciary Committee hearing Monday in which they accused him of jeopardizing the nation’s democracy in a reckless bid for political survival.

The chairs of the House committees involved in the impeachment inquiry finalized plans for the announcement during a meeting Monday night with House Speaker Nancy Pelosi (D-San Francisco). The Democrats are widely expected to accuse Trump of abuse of power and attempting to obstruct congressional investigations.

Monday proceedings began with a protester accusing the Judiciary Committee’s chairman of treason and grew only more rancorous from there. Republicans repeatedly tried to grind down the proceeding with objections, forcing committee Chairman Rep. Jerrold Nadler (D-N.Y.) to wield his gavel to silence members arguing over one another.

“You need to call balls and strikes the right way,” Rep. Doug Collins, the top Republican on the committee, told Nadler, accusing him of steamrolling opposition. When Nadler continued whacking the gavel, Collins mocked the chairman, saying “bang it harder.”

Little new was revealed during the daylong hearing, a culmination of more than two months of congressional inquiry into Trump’s request that Ukraine’s president investigate a potential Democratic rival in next year’s election as well as a debunked conspiracy theory about Ukrainian interference in the 2016 U.S. election.

No other hearings have been scheduled. Democrats are expected to formally pass the impeachment resolution through committee later this week and push for a full House vote to impeach Trump next week.

Democrats say Trump’s pressure on Ukraine — which came while he withheld a promised White House visit for President Volodymyr Zelensky and nearly $400 million in congressionally mandated security aid for the Eastern European country as it fends off Russia-backed separatists — constitutes an impeachable offense.

At the center of the hearing were dueling presentations from Republican and Democratic lawyers, who detailed the parties’ divergent conclusions about Trump’s conduct.

“We are here today because Donald J. Trump, the 45th president of the United States, abused the power of his office — the American presidency — for his personal political benefit,” Democratic staff attorney Daniel Goldman said.

Republican counsel Stephen Castor argued that Democrats have searched since the inauguration for a reason to impeach Trump.

“Democrats went searching for a set of facts on which to impeach the president,” Castor said. They settled on the Ukraine call, he said, referring to the July 25 conversation in which Trump pressed Zelensky to open the investigations.

“To impeach a president who 63 million people voted for over eight lines in a call transcript is baloney,” Castor said, adding that Trump did not act with “malicious intent.”

At times the counsels appeared to be examining different evidence. Barry Berke, a Democratic lawyer, asked Castor to confirm that Trump wanted Ukraine to investigate Joe Biden, the former vice president who is a potential opponent in next year’s election.

“I don’t think the record supports that,” Castor said.

Berke was incredulous, pointing out the request was reflected in the White House memo summarizing the July 25 call between Trump and Zelensky. Castor was unmoved, saying, “I think it’s ambiguous.”

Berke turned to Goldman, the Democratic lawyer testifying alongside Castor. “I don’t think there’s any other way to read the words on the page than to conclude that,” Goldman said.

A White House-released account of the call quotes Trump as mentioning both Biden and his son, who was previously employed by a Ukrainian energy company, and saying: “[I]f you can look into it…. It sounds terrible to me.” Ukrainian prosecutors say there is no evidence of wrongdoing by either Biden.

In addition to abuse of power, Democrats are also likely to seek an article of impeachment for Trump’s refusal to honor congressional subpoenas and his instructions to aides to not cooperate with the inquiry. And although the lawyers didn’t discuss it during their presentations Monday, Democrats are weighing whether to include parts of special counsel Robert S. Mueller III’s investigation into Russian interference in the 2016 election that concluded in the spring.

Nadler said in his opening remarks that the framers of the Constitution included impeachment for precisely the kind of behavior exhibited by Trump.

“They warned us against the dangers of would-be monarchs, fake populists, charismatic demagogues. They knew that the most dangerous threat to the country may come from within, in the form of a corrupt executive who put his private interests above the interests of the nation,” Nadler told the panel. He stressed that ongoing efforts to uncover information in Ukraine by the president’s personal attorney Rudolph W. Giuliani showed Trump’s scheme had not ended.

“President Trump put himself before country,” Nadler said. “The integrity of our next election is at stake. Nothing could be more urgent.”

Republicans have said Trump acted properly by withholding U.S. aid because he was concerned about corruption in Ukraine.

“Where’s the impeachable offense?” Collins said. “Why are we here?”

Collins called the hearing a waste of time because Pelosi already called for articles of impeachment. “The speaker undercut you. She took the thrill out of the room,” he said.

Monday’s hearing was immediately more contentious than previous proceedings, with a protester screaming — during Nadler’s opening remarks — about committee treason and the president being innocent. He was hurried from the room by U.S. Capitol Police. That tone remained for much of the daylong hearing.

Republican members repeatedly pressed Nadler about why he had not scheduled a hearing for them to call their own witnesses as required by committee rules.

Rep. Matt Gaetz (R-Fla.) decried having evidence at the hearing presented by staff lawyers rather than by Intelligence Committee Chairman Rep. Adam B. Schiff (D-Burbank), whom Republicans have faulted for his handling of the earlier phase of the inquiry.

“You’re going to try to overturn the results of an election with unelected people,” he said.

Nadler shut him down. “The gentleman will not yell out and he will not attempt to disrupt the proceedings.”

The House resolution that outlined the rules for the impeachment inquiry specified that staffers would present the report.

“The witness has used language which impugns the motive of the president, and suggests that he’s disloyal to his country,” Rep. Mike Johnson (R-La.) said.

Nadler rejected his objection, responding, “None of us should find it surprising that we’re hearing testimony that’s critical of the president.”

The proceedings dragged on throughout the day as each committee member had a chance to question the lawyers or make speeches. “I’m going to use my five minutes — but not to ask questions,” Rep. Louie Gohmert (R-Texas) said bluntly.

Seven hours after the hearing started, Collins swigged a Red Bull energy drink from the dais. Eight and a half hours in, only about two dozen audience members were left in the cavernous committee room.

Nadler had invited Trump to participate in the House hearings or send an attorney to question witnesses and present evidence, but his lawyer rejected the offer on Friday.

Trump told reporters at the White House that he “watched a little” of Monday’s hearing.

If Trump is impeached, the Senate would then hold a trial, probably in January. If he is acquitted, which appears likely in the Republican-controlled chamber, Trump would remain in office.

Pete Buttigieg has left South Bend, but South Bend hasn’t left him. Activists from the Indiana city are making sure his hometown problems follow him around. When the Democratic presidential candidate and former South Bend, […]

Chief Justice John G. Roberts Jr. will almost certainly try to keep a low profile in the upcoming impeachment trial of President Trump. But given the lack of a bipartisan agreement in the Senate, Roberts […]

Californians might be asked to vote on another homelessness ballot measure next year under a new proposal being considered by Gov. Gavin Newsom’s top homelessness advisers. Sacramento Mayor Darrell Steinberg and Los Angeles County Supervisor […]