A female gray wolf famous for her long-ranging solo journey around Oregon and Northern California was found dead on Wednesday in California’s Shasta County.

OR-54, as she was known to scientists and in the media, was 3-4 years old and wore a radio tracking collar that biologists had given her in 2017. The designation referred to her being the 54th gray wolf collared in Oregon. 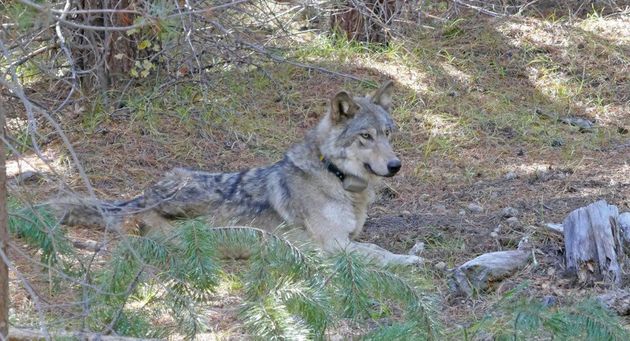 USFWS via Center for Biological Diversity

Her cause of death was unclear, but the California Department of Fish and Wildlife announced it was “investigating the circumstances.” In December 2018, a male gray wolf in northeastern California was found shot to death. Gray wolves are endangered under both federal and California state law, and the department noted that killing one is a “potential crime” that’s “subject to serious penalties.”

In January 2018, she left her pack in Oregon, known as the Rogue Pack. Experts believed she was “dispersing,” a wolf behavior meaning that the animal is “exploring new ground in search of a mate or another pack,” California DFW wrote at the time.

Her wanderings took her throughout northeastern California, with time spent in nine of the state’s counties, and back over the border to Oregon twice. Wildlife officials noted in late 2019 that she had covered at least 8,712 miles since leaving her former pack, though in their statement on her death, adjusted that estimate to 7,646 miles. The exact number of miles she had covered by her death is unknown, since her radio collar stopped working in December 2019.

OR-54’s extensive travels made her particularly interesting to conservationists and the general public. However, as The Sacramento Bee notes, she was also an object of tension with California ranchers, and was suspected to have been involved in at least five different attacks on livestock.

Ranchers and farmers eradicated wolves in California in the 1920s due to the threat they presented to livestock. The wild animals have been making an incremental recovery in the state since 2011, when an Oregon wolf known as OR-7 ― also believed to be OR-54’s father ― first crossed into the state. The only know current wild wolf pack in California, the Lassen Pack, is believed to have descended from OR-7. He ultimately returned to Oregon and formed the Rogue Pack, into which OR-54 was born.

“This is a tragic development for the early stages of wolf recovery in California,” wolf advocate Amaroq Weiss said in a statement. “Like her dad, the famous wolf OR-7 who came to California years ago, OR-54 was a beacon of hope who showed that wolves can return and flourish here. Her death is devastating, no matter the cause.”

The world is rapidly accelerating toward climate catastrophe, our financial institutions have their foot on the gas and pinning our hopes on Chinese leadership to desperately wrench the steering wheel away from the guardrail looks […]

SALINAS, Puerto Rico ― It was a late August afternoon when the rain finally came, first as a drizzle that beaded on the plaza’s magnolia trees, then a downpour, darkening the dusty bricks and forming […]

Apparently humans have something in common with the lowly cuttlefish: The ability to watch and react to 3D movies. That’s the not-at-all-fishy finding by scientists who led a study published Wednesday in the journal Science […]