As the number of coronavirus cases continues to rise in China and officials there implement stark and unprecedented measures to contain its spread, two cruise ships are now also under quarantine.

The two vessels, Diamond Princess and World Dream, are docked in Tokyo and Hong Kong, respectively.

Some 3,700 passengers and crew members aboard Diamond Princess are under a two-week quarantine in their rooms after a Hong Kong man tested positive for the virus on Jan. 25.

Screenings of the 273 passengers believed to have come in contact with the man have so far found 20 infected by the virus, all of whom have been transported to medical facilities in Japan.

61-year-old Diamond Princess passenger Masako Ishida ﻿told The New York Times Wednesday she’s thankful to have windows in the room she’ll be confined to for two weeks. According to a fact sheet provided by Princess Cruises, 377 of the 1,337 cabins aboard offer no such outside view.

Many passengers aboard Diamond Princess visited Taiwan during a day trip on Jan. 31. Taiwan’s health authority greeted the news Thursday by banning all international cruise ships from docking at the island. 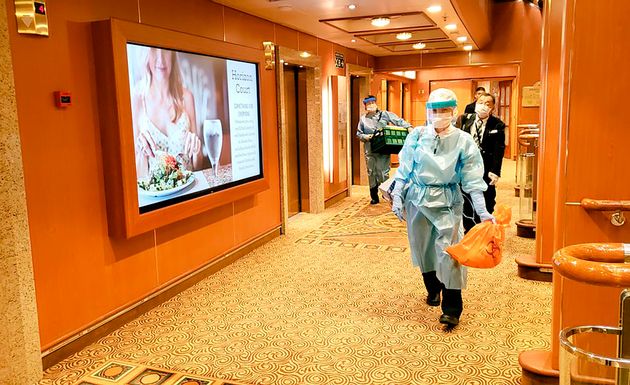 Medical workers in protective gear walk on the cruise ship Diamond Princess in this Feb. 4 photo taken by a passenger.

Aboard World Dream off the coast of Hong Kong, more than 3,600 passengers and crew are under quarantine after eight passengers tested positive during a health screen. The Associated Press reports at least 5,000 passengers had recently traveled aboard the ship before the quarantine was imposed Monday.

China’s National Health Commission said Tuesday that 80% of fatalities from the virus occurred in people over the age of 60, and 75% of those who died had preexisting health conditions such as cardiovascular diseases and diabetes.

As of Thursday, there were 28,018 confirmed cases of the virus in mainland China.

Gardai have recovered blood-stained machetes and knives believed to have been used in the brutal murder of young Keane Mulready-Woods, the Irish Daily Mail can reveal. The find was made yesterday morning in a shed […]

A passenger displaying potential symptoms of coronavirus was escorted off a plane at Dublin airport last night as medics in hazmat suits boarded the aircraft.  The man, who had originally travelled from China, was picked […]

The Queen has been treated ‘shoddily’ by Harry and Meghan and should not ask them to stay in the UK, the public believes. A Daily Mail poll also suggests there will be deep anger if […]